Tag Archive for: review and recap

“Athens”, this week’s installment of “Intelligence”, is my favorite episode of the series to date. In addition to featuring the usual roller coaster ride of action-packed twists and turns, which always makes for fun viewing, it also further explored the theme of trust, which is one that we’ve explored in previous episodes. Who can be trusted and who can’t be trusted? And, in particular, can we trust our government? The events of the episode also served as a test for the CyberCommand team members – can they be trusted to take action as needed when they come under attack?

The episode opens with a familiar face from the show’s pilot, Jin Cong, being broken out of a Chinese prison. While we have no idea at this time what his intentions are, we know that we can’t trust him. No good can come from Jin Cong being a free man.

Back at CyberCommand, Lillian and Jameson have the unfortunate task of dealing with a pair of Department of Defense Security Auditors as they question all of the safety protocols in place at the agency. There is a brief moment of levity when one of the auditors, while looking for security flaws in CyberCom’s live tissue palm recognition software, inquires as to what the protocol would be if a user “gets their hand cut off in a freak gardening accident?” Without missing a beat, Lillian’s sassy response is to order Jameson to conduct a hand count: “Make sure everyone has two.” And then with a big smile at the auditors, she quips “I feel safer already.” Clearly dealing with government security auditors is one of the necessary evils of Lillian’s job so why not have a little fun with it? 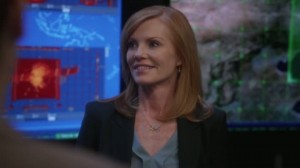 The fun ends almost immediately, however, when CyberCommand faces a very real threat and their security protocols are put to the test. An aggressive virus attacks and takes down their entire network and it becomes apparent that whoever is behind the attack is after the country’s most sensitive information. Also problematic, however, is the fact that the attack has also erased Gabriel’s memory and in essence taken the country’s most valuable intelligence weapon out of commission. Lillian and her team know they’re in trouble when Gabriel starts to panic and asks, “Who the hell are you people?”

What I particularly liked about this episode was that the women were the ones who took charge at nearly every opportunity. Lillian and Riley, brilliantly played by Marg and Meghan respectively, are two of the strongest female characters I’ve seen on television in a long time and they are thrilling to watch each week. When Gabriel loses his memory, and along with it, his trust of those around him, he physically lashes out at Jameson as he tries to escort him to ClockWork. He easily takes Jameson down with a sucker punch and it’s Riley who steps in and stops Gabriel. It’s also Riley who takes the lead in trying to calm Gabriel down and remind him who he is, that he is part of their team, and that he can trust them. While Riley is taking the lead when it comes to Gabriel, Lillian takes the lead when it comes to dealing with the threat at hand. Back in the control room, while Nelson, clearly overwhelmed by the speed and severity of the cyber attacks, is frantically running around and announcing each new assault on the network while simultaneously making nervous jokes to the auditors — “How are we doing on that security audit?” — it’s Lillian who takes matters into her own hands. She quickly and calmly assesses the situation and realizes the attacker’s true intent. Knowing that sensitive data must be protected at all costs, she makes the decisive call to neutralize the threat: “Okay, that’s it. I’m formally instituting the Orion Protocol.” When the security auditor balks at her decision because “Orion is a protocol of last resort,” Lillian swiftly neutralizes her as well: “Take a look around. There are no resorts left.” Once she has put a muzzle on the auditor, Lillian commands Jameson to “cut the trunk,” effectively cutting CyberCommand off from the outside world and thus stopping the cyber attack. When the auditor once again questions her judgment, Lillian’s defiant response is: “Put it in your report.”
END_OF_DOCUMENT_TOKEN_TO_BE_REPLACED