I’m a little short on writing time this week, so I’m going to focus almost exclusively on Lillian and of course on how completely amazing Marg was in this episode. If you liked the episode “The Rescue” because we got to see a different side of Lillian as we explored her relationship with her father, then you’re going to LOVE “Cain and Gabriel.”

In this episode, the CyberCom team learns that the FBI’s Witness Protection database has been hacked and someone is using it to blackmail witnesses into carrying out terrorist attacks. When a large quantity of potentially deadly chemicals is stolen, Gabriel uses his chip to track the vehicle and quickly determines that the target of the next attack is San Francisco. As soon as Gabriel mentions San Francisco, a variety of emotions play across Lillian’s face, and in a move that surprises everyone except for Dr. Cassidy, she announces that she will be joining Gabriel and Riley in the field to prevent this imminent attack. As she declares, “Wheels up in an hour” and abruptly leaves the room to prepare for their departure, Cassidy explains to the team that Lillian’s daughter, Rebecca (played by the lovely and talented Laura Slade from “Shameless”), lives in San Francisco. 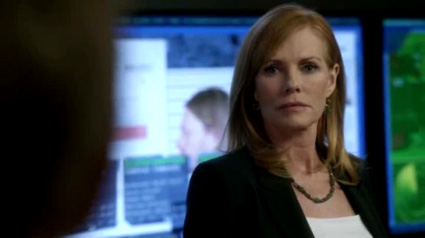 Lillian’s maternal side takes center stage in “Cain and Gabriel”. Throughout the episode, the viewers, as well as Riley and Gabriel, who even comments that Lillian isn’t herself, can see that Lillian is struggling with an internal conflict — as a mother, she wants to do nothing more than get her daughter out of harm’s way, but as Director of CyberCommand, she is expected to follow certain national security protocols for the greater good. As she tells Gabriel when he suggests that she call and warn her daughter, “The best way for me to protect my daughter is to make sure that this attack never happens. Because the minute any of us puts our own interests ahead of our job, that’s the minute that my daughter’s life really is in jeopardy.” As accurate as her statement may be, the expression on Lillian’s face is most telling. She is trying to convince herself here as much as she is trying to convince Gabriel. One of the things I loved most about this episode was reading the emotions on Lillian’s face. Often, her expressions told us just as much, if not more, of what she was thinking and feeling than her actual words did. Marg is a true artist when it comes using facial expressions to convey the nuances of her character’s emotions — that’s one of the many reasons why I enjoy watching her perform so much. 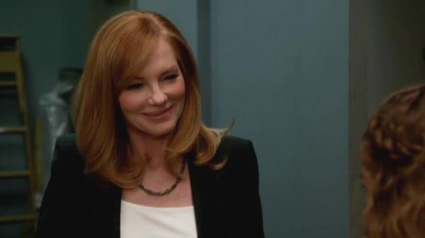 As her team works to find the attacker and eliminate the threat, Lillian stops in, unannounced, to check on her daughter. What we see right away is that their relationship, much like Lillian’s relationship with her father, is a bit strained. They obviously don’t talk very often, considering that Lillian has no idea Rebecca’s boyfriend has been out of the picture for months. Rebecca mentions her father several times and it is apparent that she is much closer to him than she is to Lillian. They obviously love each other, but it’s not an easy relationship and when Lillian comes back to see her a second time and demands that Rebecca leave town, Rebecca lashes out at Lillian. She tells her that she is too controlling and that she treats her family as if they are her employees to order around. This sounds like an argument they’ve had before and is probably also one of the reasons why the two of them live on opposite coasts. Rebecca’s words stop Lillian in her tracks and she tries again, a little less commanding this time, and is able to convey to Rebecca why she needs for her to leave town immediately, with the promise of phoning her to explain the full story as soon as she can. Hats off to both Marg and Laura Slade for their scenes together. They had excellent chemistry and were very believable as mother and daughter.

As powerful as those mother-daughter scenes were, I think my favorite moments were actually Lillian’s scenes with Riley. While I loved that both Gabriel and Riley were concerned for Lillian, I thought it was a nice touch that it was Riley talking to Lillian about her own mother and about life being too short that convinces Lillian to be a mom first and CyberCom Director second and do what she could to get her daughter out of town. I also love that Lillian has obviously become a role model for Riley. This became evident when Riley rattled off a list of Lillian’s impressive professional credentials to Gabriel and pointed out to him that every woman in the intelligence community wants to be Lillian. Riley sounded so proud of her, and in a later scene with Lillian, she admitted as much: “There are so many things about my mom I wish she had had the courage to tell me. Lillian, if Rebecca knew you — really knew you — she’d be so proud.” I hope the writers will use this scene as a bonding moment for them and explore their relationship further because I like the idea of Riley thinking of Lillian as kind of a surrogate mother. 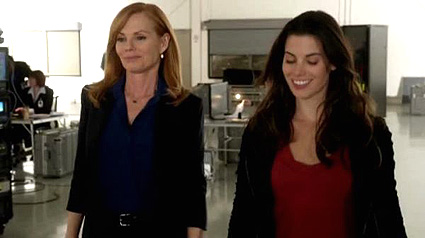 Riley’s words inspire Lillian twice in this episode, first to go and protect Rebecca and then most importantly, once the crisis is averted, to go back to Rebecca and give her the chance to really get to know her mother. This leads to one of the most beautiful scenes of the episode. Rebecca and Lillian are having dinner together and Rebecca decides to show Lillian the latest painting that she has been working on. The painting, which is of the two of them when Rebecca was a small child, shows mother and daughter walking hand-in-hand on the beach. It is a memory that is dear to both of them, as is evidenced by Lillian’s tears when she sees it, and the episode concludes with grown mother and daughter standing hand-in-hand staring at the painting. It was a very moving scene, played beautifully by both Marg and Laura Slade. 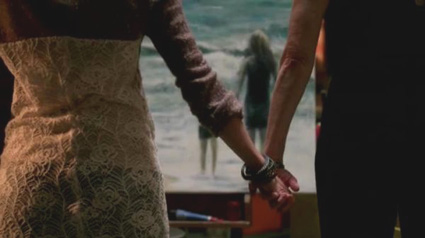 I hate that we’re nearly at the end of Season 1, but I’m so glad that we were given another opportunity to delve even further into the different layers of Lillian’s character. Seeing Lillian’s more vulnerable side this week contrasted nicely with the badass Lillian that we’re so used to seeing and I hope that we’ll see even more sides of her in the future. I’m especially interested in learning more about Lillian’s relationship with Rebecca’s father since he was mentioned rather ambiguously several times in this episode. So many possibilities to explore…Have I mentioned how much I love this series?

Screen captures of Marg from the episode are available in the gallery. —> Click Here!