" /> REVIEW: MARG GIVES A SPELLBINDING PERFORMANCE IN "THE OTHER PLACE" | ALL ABOUT MARG: a fansite devoted to CSI and China Beach actress Marg Helgenberger
Blog - Latest News

As a long-time fan of Marg Helgenberger’s, 26 years and counting now, it’s safe to say that I’ve seen nearly everything she has ever done on both the big and small screen. I clearly know what an incredibly talented actress she is. And yet, somehow, I was still completely unprepared for just how much she would blow me away with her performance in “The Other Place”. I’m not a professional reviewer, nor do I know much about theater, so I’m just going to write about how it felt to watch my favorite actress up on stage, probably less than 20 feet away from me.

Surreal is probably the best word to describe the experience, especially that first moment when she appears on stage. As Dr. Juliana Smithton, Marg commanded the stage from the moment she appeared. Her voice filled the room and I instantly had that flailing fangirl moment of “I cannot believe I’m actually sitting here watching Marg Helgenberger on stage right in front of me!” Once I recovered, that feeling was immediately replaced by a tremendous sense of pride. I had already read the play and know that it’s a great role, but that it’s also a very challenging one, and I’m just so proud that she chose to tackle it. And she just looked so damned good up there. So poised and confident, like she was just ready to kick the role’s ass. And she did. She absolutely nailed it.

Because “The Other Place” is a puzzle play and it’s all about the journey to discover what is really going on with Marg’s character, Juliana, it’s impossible to go into any specific details without spoiling the plot for others, but I can say that what impressed me most about Marg’s performance was how effortlessly and convincingly she moved through the wide array of emotions that her character Juliana displays throughout the play as we take this journey to the truth. Early in the play, at any given moment, Juliana could be frustrated, sarcastic, argumentative, downright cruel, sassy and flirtatious, almost deliriously happy, and even humorous. As she begins to move closer to the reality of her situation, she then transitions to confused, emotionally distraught, vulnerable, and finally, once she accepts her reality, determined and resilient. It was just such an incredible experience as a fan to be sitting so close and being able to watch all of those emotions play across Marg’s face. And it’s such a different viewing experience from what I’m used to seeing on TV or on the big screen. There’s no director to yell ‘Cut!’ and do another take and what I’m watching has not been edited to piece together the best takes. It was completely organic – just Marg creating all of these pure, raw emotions and it was beautiful to watch her work her magic. I lost track of how many times my breath just caught in my throat while watching her. It was truly spellbinding.

I was fortunate enough to be invited backstage for a few moments to say hi to Marg after one of the performances, and if my brain hadn’t completely left me, I would have loved to ask where she was pulling from for inspiration for a couple of the more emotional scenes of the play because they were just so intensely moving. Alas, fangirls and intelligent questions just don’t seem to go together, at least for me anyway, so I blanked out and didn’t ask. A huge thanks to Marg though for graciously spending a few moments with a couple of crazy fangirls. Her kindness made what had already been a perfect experience, truly unforgettable. Thank you, Marg! xo 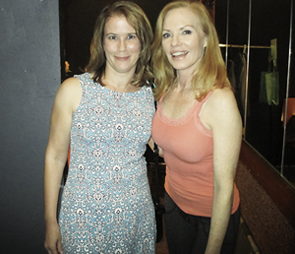 Me posing with Marg after the June 6 performance of “The Other Place”. (Please do not re-post without permission. Thanks!)

Note: I didn’t mention the performances of Marg’s costars, Katya Campbell, Adam Donshik, and especially Brent Langdon, who played Juliana’s husband, in this write-up since my site is all about Marg, but I do want to give them a shout out as well because they were also outstanding in their roles.

NEW INTERVIEW WITH MARG: “I’M MUCH MORE COMFORTABLE WITH MYSELF” MARG VISITS CBS THIS MORNING TO DISCUSS UNDER THE DOME & THE CSI SERIES...
Scroll to top