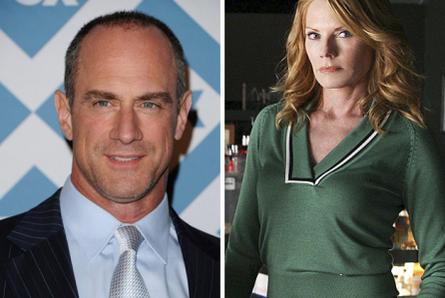 “Coming of age dramedy Holding Patterns has added Christopher Meloni and Marg Helgenberger to the cast, joining Freddie Highmore, Odeya Rush and Haley Joel Osment. The film follows a young man (Highmore) still living at home with his mother and stepfather who sets his sight on a girl (Rush) who works at his local coffee shop. The problem – she has a serious boyfriend. As the two become closer, the line between friendship and romance becomes blurred and they’re forced to examine where their lives are going. Meloni will play “Howard,” while Helgenberger will play “Samantha,” the main character’s mother. Rita Volk, Jake Abel and Taylor John Smith also appear.”

According to an earlier article from Deadline, Holding Patterns is currently in production in Mobile, Alabama, so now we know why Marg is there this week. 🙂

MORE BEHIND-THE-SCENES PHOTOS FROM THE LITTLE FOXES PHOTOSHOOT
UNDER THE DOME 3.11 “LOVE IS A BATTLEFIELD” RECAP – “YOU’RE NO LONGER ONE OF US.”
NEW INTERVIEW: MARG ON ‘LIVE WITH KELLY AND MICHAEL’
RECAP OF UNDER THE DOME 3.05 “ALASKA” – ALL HAIL QUEEN CHRISTINE (OR ELSE!)
VIDEO: MARG VISITS CBS THIS MORNING
INTELLIGENCE 1×05 ‘THE RESCUE’ – “I REMEMBER EVERYTHING YOU TAUGHT ME, DAD.”