I’ll keep my remarks somewhat brief since I’m not a professional reviewer or writer and because I don’t want to spoil anyone who hasn’t yet watched the premiere, but suffice it to say, I LOVED it! From the opening sequence, it’s just packed with non-stop action, spectacular special effects, strong female characters, witty dialogue, believable chemistry between the major characters, and just a damn good storyline. I knew “Intelligence” was going to be good, but it far exceeded my expectations.

The much anticipated return of Marg to primetime television was, of course, my primary reason for tuning in to watch “Intelligence” and she does not disappoint! Marg turns in a stellar performance as Lillian Strand. As the head of CyberCom, Lillian leads the fight to protect the U.S. from its enemies and she takes her job very seriously. I really liked the complexity of Lillian and the way Marg portrayed her: she’s a total badass – no-nonsense, take charge, wicked smart, tough as nails (and let’s not forget sexy as hell!). Yet, at the same time, she clearly has empathy for Gabriel Vaughn’s plight as he is trying to discover the truth about his wife, even though it makes him reckless and insubordinate at times. I also liked that there are already several teasers regarding Lillian’s personal life — seems like there are lots of possiblities for interesting storylines to further develop Marg’s character as we move through the season. I don’t think any of Marg’s fans will be disappointed in this role. It’s a great fit for her.

Congratulations to Marg and the cast and crew of “Intelligence” for their much deserved ratings victory for such a strong series premiere. 16.6 million viewers tuned in to make “Intelligence” the “most watched new series of the season” (Credit: Intelligence CBS News Blog).

Click thumbnails to be taken to screen capture album:

Marg’s final episode of CSI, “Willows in the Wind”, aired on AXN España this week. As part of their farewell to Catherine Willows, the Spanish television website teleprograma.tv posted the following interview with Marg. In some respects, it is similar in content to what we have seen in other ‘farewell’ interviews, but it is still definitely worth a read, especially for her comments regarding her former castmates.

Any errors in translation from Spanish to English are my own.

The Final Case for Willows

After 12 seasons, Marg Helgenberger wants to focus on his family and the theater.
By Juan Silvestre

It was not an easy decision and took months to make, but Marg Helgenberger felt it was time to turn the page, and so, after 11 ½ years, she decided to leave ‘CSI: Las Vegas’. Tonight AXN airs the emotional farewell of criminalist Catherine Willows.

Do you miss her [Catherine]?

Very much. I feel that I was more her than me, that I know her better than I know myself.

Why did you leave?

It was the right time. People all over the world recognize me and I found myself wondering what would become of me when I stopped playing the role of Catherine.

What was the first thing you did after you left [the show]?

I went on a two week holiday to the beach. Then I did many things that I had not been able to do while working on the show — normal, mundane things like cleaning the house, being with my family and friends, and with my pets. And returning to the theater.

Are you still in contact with your former castmates?

With the ones I was closest to. But I’m not dead, you know?

How was working with William Petersen?

Incredible. We have shared many things, both on and off the set. I would love to work with him again.

Is there any project in sight for the two of you?

No, but it would be great to play Catherine and Gil again.

Is there a scene [with Petersen] that you remember most fondly?

The last scene I recorded with him. We had very little dialogue. I had to stop after the line “I knew before you that you were going to follow your path” because I got so emotional.
END_OF_DOCUMENT_TOKEN_TO_BE_REPLACED

Thanks so much to all of the fans who chose to participate in our birthday video to celebrate Marg and her special day. This year I’m pleased to report that we had 33 participants representing 13 different countries. All of your words were beautiful, so I really hope that Marg will see this video, if not today, then some day. I think that she would enjoy hearing how much you all love and respect her and all that she stands for. A special thanks to Stèphanie from Marg Helgenberger Brasil and to Sharon, my second-in-command here, for all of their help in making this video happen. Also, a huge thanks to AndryPresh for making the graphics that were used in the video.

Marg, if you read this, I hope that you have a wonderful birthday and that this video makes your day even more special. Your fans truly adore you and I hope this video shows that.

For those who have requested them, we now have transcripts of the Walk of Fame speeches from Marg, Jorja Fox, and Dana Delany posted in our Press Archive. Thanks for your patience in waiting for those since they do take quite some time to do.

And for those who have also been waiting patiently, we have also now uploaded photos from the event to the gallery. There are lots of great shots of Marg, her family, and her CSI costars in the albums. I owe a huge thank you to Jen, Lynette, and Leah, who attended the ceremony with me, for allowing me to share their photos in our fan album. Between the pouring rain, the tents, the crowd, and waterlogged equipment, quality photos were hard to come by so I’m very grateful that they were willing to add their photos to the collection. 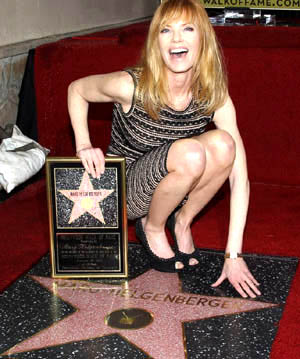 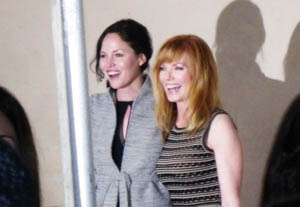 Photos my friends & I took at the ceremony

One of the few souvenirs that I picked up on my trip to L.A. was a copy of the most recent issue of The Hollywood Reporter. They did a nice feature on Marg this week to celebrate her receiving a star on the Hollywood Walk of Fame. In the feature, she discusses her thoughts on leaving CSI after so many years and about her hopes for a future on the big screen and on Broadway. Click the thumbnail below to view the scans in the gallery. To read the complete article, please visit their website at www.hollywoodreporter.com. 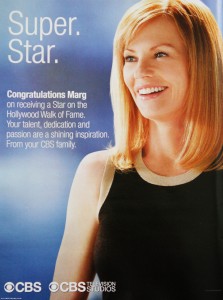