Thanks so much to @redrugrat for sharing the link to this video. This clip includes highlights from Dana Delany’s speech, Jorja Fox’s, as well as Marg’s. Enjoy!

Marg joined the “CBS This Morning” co-hosts today to talk about her decision to leave the hit CBS series “CSI.”

If the embed code doesn’t work for some reason, you can view it HERE on the CBS site.


You can also read a transcript of Marg’s interview HERE in our 2012 Press Archive.

Enjoy Catherine Willows while you can, because soon it will be time to say goodbye to CSI‘s hottest investigator, as well as to Marg Helgenberger, who has played the role since 2000. In this exclusive interview, one of TV’s highest-paid stars reveals why she’s signed on for the 11th season and how she’d like to see Catherine exit. 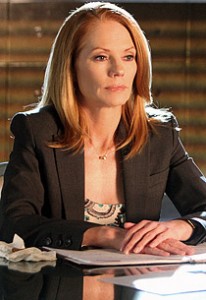 TV Guide Magazine: Not long ago, you told me that 10 seasons would be enough. Why the change of heart?
Helgenberger: Well, there’s been a few changes in my personal life. [Helgenberger split last year from her husband, actor Alan Rosenberg]. My ex-husband and I are on very, very good terms, but the way the money was divided certainly had something to do with me deciding to come back for another season.

TV Guide Magazine: Really? I think most people would assume you’d never have to work another day in your life.
Helgenberger: Yes, it’s been a very lucrative job for me, so this wasn’t something I financially had to do. It was something I wanted to do to build up my savings a bit more.

TV Guide Magazine: With a pay raise, you were in line to top Law & Order: SVU‘s Mariska Hargitay as TV’s highest-paid actress, right?
Helgenberger: I did not get a pay raise this year. I asked to do less episodes, so I am doing only 19. CBS was also using the poor economy as a way to pull in the reins, so honestly all of us took pay cuts this year. Because I’m doing [fewer episodes], I won’t be making as much. Plus, I negotiated to do a few episodes in which I’m only working three days, so the salary was adjusted. Apart from the money, I wasn’t quite ready to let go of the character and the people I work with.

TV Guide Magazine: You aren’t experiencing William Petersen envy just yet?
Helgenberger: I definitely feel that envy when it’s a late night on set and I’m exhausted. I saw Billy in a play last summer, and he apparently is coming to the set soon [in his role] as a producer on the show. We have a great fondness for each other, and I, too, would love to switch it up and do other characters in plays, television and films. That is my plan after this season.

TV Guide Magazine: I’m assuming the show wanted you for longer than one more season?
Helgenberger: They did, but it was on terms I didn’t find agreeable. I wanted to do 13 [episodes] and be finished by Christmas, but they wouldn’t go for it. I’m thinking of this as my last 19 episodes.

TV Guide Magazine: Have you spoken to the writers about what you’d like to see for Catherine?
Helgenberger: I certainly would not want to die and have my body autopsied. Nor would the fans. We’re going to get into what’s left of the casino Catherine inherited from her father, some of it told in flashback. This could possibly lead to Catherine’s exit. It’s very interesting to me to think that a woman my age [51] could have a big career change and develop a whole other set of skills. That’s how I’d like to see it — she’s still in Las Vegas in a whole other world and close to the action if she needs to be.

TV Guide Magazine: Speaking of action, how’s your love life?
Helgenberger: I have a new boyfriend who’s not in the business. Life imitates art because Catherine has her boyfriend as well [Detective Vartann, played by Alex Carter]. And I just heard that we are going to have a love scene together — in bed. I haven’t done that since George Clooney in ER. I’m going to have to worry if my legs are shaved!

Want to voice your opinion? Come discuss on our Facebook page at www.facebook.com/allaboutmarg 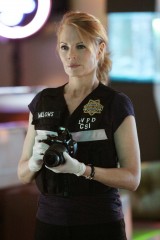