" /> intelligence 1×12 | ALL ABOUT MARG: a fansite devoted to CSI and China Beach actress Marg Helgenberger

With a season that has been filled with heart pounding twists and turns, it should come as no surprise that part 1 of the Intelligence season finale, “The Event Horizon” delivers even more thrills than ever before. This action-packed episode features not only a crime scene cyber-render that points to Gabriel as the prime suspect of a multiple homicide, but also another fierce head-to-head match-up between Lillian and her old ‘friends’ Adam Weatherly and Jeffrey Tetazoo. And as if those highlights weren’t enough to guarantee a thrilling and suspenseful episode, we also have the return of both Mei Chen and Leland Strand to add a few more twists and turns. What has become the central theme of this first season of “Intelligence” – trust – also comes to a head as the CyberCom team works to clear Gabriel’s name and discover who is actually behind the murders. With each passing scene, it becomes more and more difficult to determine who can be trusted and who cannot.

The episode opens with three men being murdered in a hotel room – the Deputy Director of the FBI for domestic ops, the former head of Intelligence for the U.S. Central Command in the Middle East, and a security guard. When CyberCom starts investigating the murders, they learn that someone was working behind-the-scenes to clear the assassin’s path, wipe the hotel’s key card system clean, and otherwise remove any trace of who committed the crime. As Nelson quips, this was someone ‘with mad skills’. Gabriel then enters the hotel’s computer system in order cyber-render the crime scene. In an unexpected turn of events, it is actually Gabriel who appears in the cyber-render as the potential assassin.

As Lillian questions Gabriel about his whereabouts so as to make sure he does have his alibi in order before Director of National Intelligence Adam Weatherly arrives, his visit being protocol for this type of investigation, Gabriel reveals an unsettling fact – he woke up that morning with a raging headache and has no memory of the previous night’s events other than that he had a couple of beers with Riley. Lillian and her team, of course, trust Gabriel implicitly and know he couldn’t possibly have committed such a crime so they begin to look for clues as to what has really happened and who is responsible. Weatherly and his cohort CIA Director Jeff Tetazoo, however, apparently do not share a similar trust of Gabriel and, again, per the protocol required for such an investigation, they storm into CyberCom headquarters and place Gabriel into “protective custody” or what Weatherly refers to as “keeping our asset safe.” 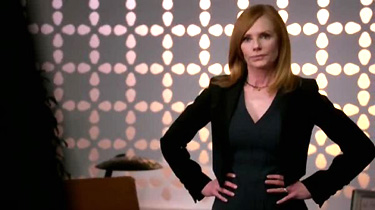 Lillian then has a very tense meeting with Weatherly and Tetazoo. Protocol or no protocol, she clearly doesn’t trust either of them, especially Tetazoo, whom she accuses of spying on her agency again. Lillian and Tetazoo trade a few barbs about common courtesy and information sharing before they finally get down to the business at hand. Weatherly and Tetazoo then inform Lillian that the meeting in the hotel room was an ‘off book’ meeting, definitely not protocol for men in their positions. Tetazoo, however, seems more interested in focusing on Gabriel. He tells Lillian he has two theories to explain Gabriel’s involvement with the murders: 1) One of the men killed was in command of the mission in Mumbai that ultimately led to the death of Gabriel’s wife so it could be Gabriel seeking revenge; or 2) Someone has hacked into Gabriel’s chip and is controlling him remotely. Tetazoo is leaning towards the second theory and presents Lillian with the details of a classified report written by none other than Dr. Shenandoah Cassidy more than a decade ago. Cassidy outlines what he feels could be a vulnerability in the Clockwork program – that it is possible that someone could hack into the chip and cause a “dissociated cerebral action” and basically operate the asset (i.e. Gabriel) remotely. Again, more questions of trust arise: Who would have had access to this classified information and want to use it against CyberCom in such a manner? 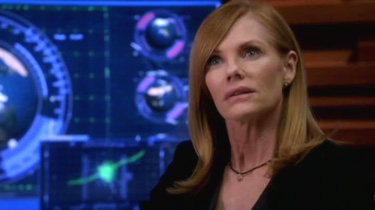 Tetazoo questions Lillian about her refusal to believe Gabriel cannot be controlled.

Once Lillian is briefed, Weatherly and Tetazoo then separate and interrogate both Gabriel and Riley. Weatherly questions Riley as to how far she would actually go to protect Gabriel, implying that she could be considered Gabriel’s accomplice in the murders. Tetazoo and Gabriel have a similarly contentious meeting and when Gabriel takes a cyber-peek at Tetazoo’s files and remarks “Judging from your files, you’re more likely to have committed these murders that I am”, Tetazoo is none too pleased. Gabriel then tries to plead his case, saying that he should be out there searching for whoever has framed him, but Tetazoo informs Gabriel that he isn’t going anywhere because he is “a dangerous weapon that can’t be controlled” and then rather viciously states that as far as he’s concerned, he’ll have the chip ripped out of Gabriel’s head before Gabriel is allowed to leave CyberCom. Feeling that he is being threatened, Gabriel punches Tetazoo and, with Riley’s help, escapes from custody. 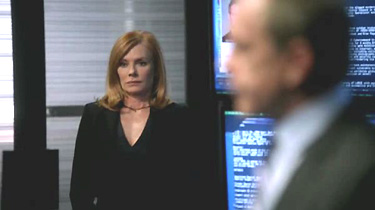 Lillian is removed from command.

Tensions further escalate after Gabriel escapes when Tetazoo confronts Lillian about her refusal to believe that Gabriel cannot be controlled. Lillian thinks Tetazoo is just mad because his ego got bruised and chides him: “You took a punch, Jeff. Get over it!”. Weatherly steps in, however, and tells her that this incident has caused the President to doubt her ability to control and contain her asset. Weatherly then orders Lillian removed from the command of CyberCommand until further notice, names Tetazoo as Acting Head of CyberCommand, and orders everyone to give Tetazoo their complete loyalty. To the dismay of Lillian and her team, Tetazoo chooses not to presume that they are innocent until proven guilty and launches a full scale manhunt for Gabriel and Riley, ordering that they be brought in dead or alive.
END_OF_DOCUMENT_TOKEN_TO_BE_REPLACED