As they prepare for opening night of “The Other Place”, which is less than two weeks away, Marg and her director Christoper Innvar took time of their busy schedules to meet with the media. Here’s an excerpt from their dialogue, which has been posted on wwwberkshirefinearts.com, along with many photos. 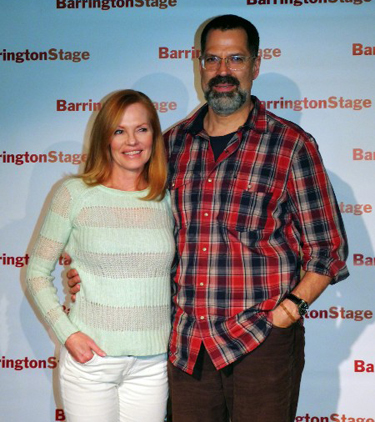 Christopher Innvar: The play is about loss. It’s a family situation with a very powerful woman who’s great at her job in a world where mostly men are dominant in the profession. She’s at the top of her profession and suffers a loss. It’s about her family relationships and what she’s lost. At the end of the play she’s found. Through her family and revisiting ghosts in her life she’s able to be found and anchored again. There’s a lot of water imagery in the play. Talking with the set designer, Brian Prather, we kept saying untethered and lost at sea. There’s no anchor for her.

She ends up on Cape Cod surrounded by water on three sides. She ends up being found.

I really don’t want to say much more because it would spoil it for you when you come to see the play.

Marg Helgenberger: That was so well said that I don’t know how to follow up on that. The role that I’m playing, Juliana Smithton, could fall under the category of tour de force. When you get the opportunity to play a role as complex as this woman is, as an actor, why not jump at the chance.

I was available. (Her voice rose emphatically implying irony.) I was familiar with the playwright’s writing. I was very interested in his Annapurna. Someone had suggested it to me. After my run on CSI I had wanted to do a play. It was already snatched up by someone who wanted to produce it in Los Angeles. That’s the production which is now in New York.

I never heard of Sharr White before. In fact I did know that The Other Place was on Broadway. I think at the same time when I became familiar with Annapurna. So when the play came to me in February or March I was eager to read it because he’s so talented. When I read it or give it to other people to read, the one word that always comes out of them is Wow. (soft laugh). For so many reasons. She’s such a highly, highly intelligent woman. To a fault. She’s smarter than most. She’s a woman in a man’s profession dominated by men. She has to be stronger and tougher to assert herself. Because of her intelligence she has an impatience with everyone. She has cut herself off a little bit from her emotional side. And because of something that happens but I’m not going to give it away. A family situation that was quite devastating and dramatic to her.

In order to continue with her life she has to bury those feelings very, very deep. That allows for all these different sides of her to come out in odd ways. Unpredictable ways. It’s probably the most challenging role I’ve played. (nervous laugh) It’s interesting to play such a complicated role at my age rather then when you’re younger. You don’t have the energy to bounce back. It’s mid week in the rehearsal process and already I’m like, oh shit, there’s three more days of this.

Question Are you the only actor?

CI: No there’s three other actors (Katya Campbell, woman, Adam Donshik, man, and Brent Langdon, Ian.) I was doing a Sharr White play in Manhattan The Snow Geese. Julie (Ann Boyd artistic director) talked about this slot being open for me to direct a play. We all read the play and thought it was fantastic. We went into casting in New York. Our casting director Pat Mc Corkle said that Marg Helgenberger wants to do theatre. (Incedulously) OMG we thought she would be prefect. (Marg laughs) We all looked at each other, oh my goodness, she would be absolutely perfect. We did a skype session. Then I went to LA and we talked. Yeah, this character who is brilliant, sharp, funny, sexy has all of these strengths. At the top of her profession and we were all just such fans of hers.

CI: Absolutely. The way we talked about this play made me feel that we could help each other out and make this play come to life. Marg was excited about doing it.

MH: Yeah. Very much so. You sent me an e mail with an interview that Sharr had done about the genesis of this play. His father being a scientist and his brother or brother in law also being a scientist. He just wanted to floor someone who seemed to always have an answer for everything. Somethings are (emphasis) unexplainable. Things of the heart.

CI: What happens to someone who all their lives have all the answers. What happens when they start not having the answers? What does that do to someone? That metaphor of being lost at sea. For the first time not knowing where you are or what direction to go in. That’s a challenge.

Charles Giuliano Doing research for this interview I was astonished by the depth of your resume including film and television. Also I was intrigued that early on you deboned meat in your father’s butchery. That would seem to presage CSI. I am interested in how artists evolve.

CG: I’m also interested in Chris’s evolution from leading man and actor now to director. So the question is about how you evolve as artists. Why for example are you stepping out of the national spotlight of television and film to come to a small, regional theatre and perform in a play? How are you guys staying alive as artists by doing these kinds of things?

MH: I have been wanting to do a play for a very, very long time. For various reasons it just didn’t quite work out. For CSI I was tied up for twelve years and the hiatus is two months. That doesn’t leave you a whole lot of time to do a play. Also I was raising my son in LA. So I just really didn’t want to be away. But, having said that, since I left the show in December of 2011, I went around and met with producers in New York. Of course Los Angeles too and Chicago. I expressed my interest in it. (Theatre) They were all eager to meet with me. They would say let’s find something, let’s find something. (exasperated gasp and self amusement) A few things came along but nothing I really wanted to do. So, I don’t know, it really kindah has to do with the part. It was one of these roles that I really couldn’t not do. It was so amazing. It is amazing. I felt if not now when? I felt once I’ve done with this I’ll be so proud of myself. (soft laugh of relief then outburst of laughter)

To read the rest of the dialogue and view more photos, please visit wwwberkshirefinearts.com.

MARG IS THE VOICE OF WILLA CATHER IN NEW DOCUMENTARY
MARG ATTENDS THE 24TH ANNUAL RACE TO ERASE MS GALA
WHY MARG HELGENBERGER IS MY ROLE MODEL
INTERVIEWS WITH MARG AND REVIEWS FOR THE LITTLE FOXES
AAM RECAP & REVIEW OF INTELLIGENCE 1×09: “WE ARE THE HOPE.”
INTELLIGENCE 1×02 RED X: IT’S LILLIAN’S CALL