MARG THE ATHLETE AND SPORTS FAN

When one looks at Marg Helgenberger, it’s hard to believe that she once failed P.E. in high school. (Her mom shared that little tidbit in a 2003 ‘Golf for Women’ interview!). These days, Marg earns nothing less than an ‘A+’ when it comes to physical fitness.

When it comes to working out, Marg says that while staying in shape has always been a hobby of hers, it’s also a job requirement. That makes sense, considering that her job places her onscreen for millions of viewers each week. There’s definitely motivation there to look your best.

And Marg takes her workout very seriously. She says that she exercises for “about an hour and a half every day.” Her routine regularly includes yoga, which Marg likes to do two or three times a week. She says yoga helps her stay fit and is also for peace of mind. 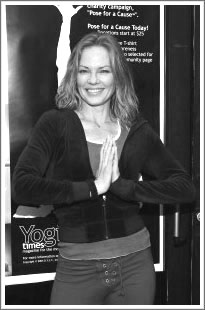 In 2005, Marg actually spent her summer hiatus from ‘CSI’ attending a yoga camp in California, where she practiced six hours of yoga a day.

Other activities that Marg includes in her workout are spinning classes and lifting weights, “just to get those biceps going,” she says.

In an interview for Prevention Magazine, Marg discussed her workout routine in more details and discussed how she has had to make some change as she has gotten older:

Q I’m guessing you have a trainer, right?

A. (Nods). Three times a week, we do an hour of free weights and weight machines. And I do a lot of jumping – it helps build bone density. A while back, I had a bone density test, and I’d lost some of that, so I pumped up the calcium and started jumping exercises. It’s helped.

Q What about cardio?

A I try to break it up. I’ll do a stair-climber — it’s low impact, but you can break a sweat – or I run to get my heart rate up, or I do the elliptical.

In addition to the physical activities she engages in to stay in shape, Marg is also, as she terms herself, “a passionate recreational golfer.” She says that she loves golf because it takes so much focus: “The combination of concentrating and relaxing is so interesting.”

As much as she enjoys playing sports like golf, Marg is also a huge sports fan. Her sport of choice is football, and her team of choice, The Carolina Panthers. The Carolina Panthers might seem an odd choice for someone from Nebraska now living in Santa Monica, California, but Marg explained how this came about in a 2004 interview with Craig Kilborn: “It’s not really a terribly interesting story, but it’s sort of touching. I was shooting a movie in Wilmington, North Carolina, when they became a team. And my son and husband came to visit. My son was five, four or five at that time, and they said, they made this pact that this was going to be our team. And so we’ve followed them ever since then.”